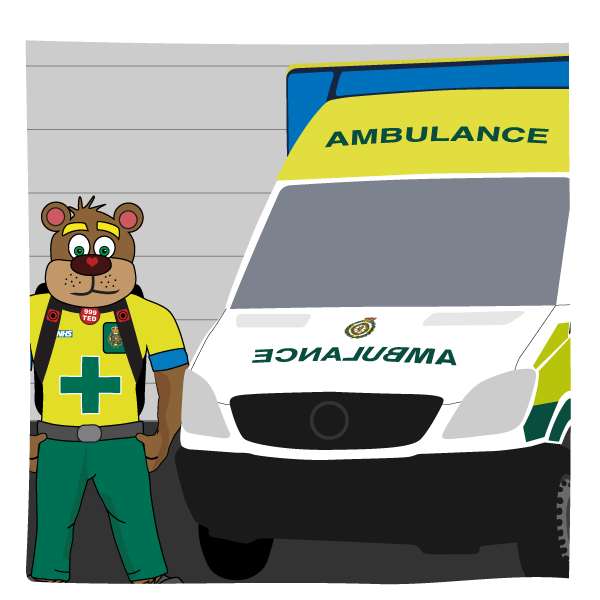 It’s 999 Ted’s first day at work as an Ambulance Bear Assistant and he cannot wait to go out and start helping to save lives.

999 Ted has only been at his ambulance station for ten minutes when they receive an emergency call. A little boy has fallen off his bicycle. He wasn’t wearing his helmet and he has hurt his head very badly.

999 Ted gets into the ambulance with Paramedic Anthony, one of his colleagues and drives quickly to the scene of the accident.

When they arrive the little boy is feeling sleepy and Mrs Smith, the lady who called 999, says that his name is Christopher and he lives near her house. While waiting for the ambulance to arrive, she checked that his airway was clear so he was able to breathe and she did not move him in case there is a neck or spine injury.

She also says that his mum has been informed and she is on her way.

999 Ted asks Christopher to stay awake and show him where his head hurts. Christopher is confused and unable to speak properly because of his head injury.

Anthony continues to monitor Christopher and when they arrive at the hospital Christopher is taken straight to Accident and Emergency. His head is X-rayed and the doctor also checks that there are no other injuries. The x-ray shows that Christopher had a concussion and will need to stay in the hospital under observation.

Luckily Christopher had no other injuries and made a full recovery from his concussion. Christopher was very scared and promised his mum and 999 Ted to always wear his helmet from now on when cycling.

999 Ted says: “REMEMBER- Always wear your helmet when cycling! Also check that it’s the right size for you and fitted correctly”