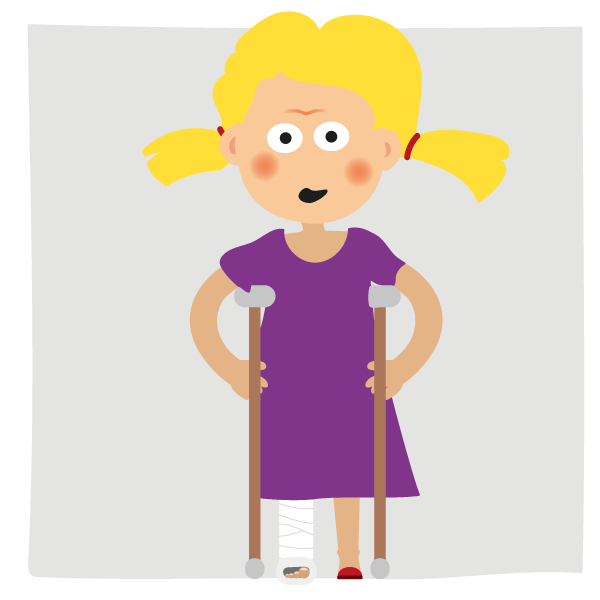 It was a cold day and Jenny was playing with her toys upstairs when her mum called her down for dinner. She ran quickly towards the stairs and on her way down she didn’t notice the cat was asleep and fell straight over it. She fell hard down the last few steps. Jenny’s mum heard a loud cry and rushed to see what was happening.

Jenny was curled up at the bottom of the stairs crying, saying her leg was hurting. Her mum quickly called 999 and asked for an ambulance and 999 Ted arrived on the scene to find a very scared girl. “Hi, my name is 999 Ted, what’s yours?” said 999 Ted.  The young girl replied “Jenny.”

999 Ted started talking to Jenny to try and calm her down and while he was chatting he was able to check Jenny over. He first checked her back and hips, but was concerned about her leg as it looked as though she had broken it.

“Jenny”, 999 Ted said, “What I need to do is check that leg, is that ok?” Jenny replied, “but it hurts”, so Ted said, “let me give you something for the pain.”  After a short time Ted said again, “right, Jenny, the pain shouldn’t be too bad now so I’m going to take a look.” Jenny began to cry as she was very scared as to what 999 Ted was going to do.

999 Ted was very gentle and continually chatted to Jenny while checking her leg. 999 Ted said, “Jenny, I’m going to have to take you to hospital as your leg will more than likely need an X ray. This is where the hospital takes a picture if needed.”

999 Ted replied, “I will be with you in the back of the ambulance; there’s nothing to be worried about.”

999 Ted placed Jenny onto a stretcher and she was taken to hospital. On the way there 999 Ted blew up gloves for Jenny and drew faces on them. He did this to help her to relax, and he asked if her leg needed a cast on it what colour plaster she thought she might like on her leg. Jenny replied, “I would like a pink one; that’s my favourite colour.” 999 Ted laughed and said, “I thought you might ask for that colour as you’re wearing a lot of pink now.”  Jenny smiled.

999 Ted took Jenny into the hospital and left her with the hospital staff. All the staff there looked after Jenny very well.

Jenny did get to have a pink plaster after all, and when she got home she was very proud to show off her plaster to everyone.

999 Ted continues to work for the ambulance service, helping lots of injured people on a daily basis.

999 Ted goes to organised activities held by SCAS so that he can talk to other children about dangers that could happen.